Gerard Greene, Chief Executive of Community Pharmacy NI has told the Westminster All-Party Parliamentary Group on Pharmacy today that patient services in Northern Ireland lag massively behind its counterparts in Great Britain and that nothing is being done about it.

Setting out the stark message to a range of MPs and Lords, Gerard Greene said that patients here have been deprived of services that have been accessible elsewhere in the United Kingdom for several years. He said:

“Scotland and Wales provide us with excellent examples of what innovation and development looks like and the impact it can have on improving patient outcomes, reacting to shifting demands and delivering efficiencies.”
“The healthcare system in Northern Ireland needs radical change and key to this is giving community pharmacy a more proactive role in public health and in the prevention and management of long-term conditions.”
He added:
“For example, Community Pharmacists in the likes of Scotland and Wales have been prioritised for training in Independent Prescribing – whereby a pharmacist may prescribe autonomously for any condition within their clinical competence – is not even being considered in Northern Ireland.”

“Development in community pharmacy has suffered significantly as the current £20m per annum funding shortfall has been compounded in recent months by unprecedented generic medicines shortages leaving community pharmacists and their staff with a daily struggle to find many of the medicines needed by their patients. When they do source the items required, they can find themselves paying more than ten times the usual price, all without knowing if they will be fully reimbursed.”
“How can we meet the changing needs of public healthcare when there is huge funding problems in the background. We are falling further behind and need the members of the APPG on Pharmacy to recognise that and intervene on our behalf – especially when we have no Assembly or Executive to deal with this devolved issue.”
He informed the parliamentary group that the failure to agree new contractual arrangements was the cause of a lack of development in patient services and that in some areas we are up to 10 years behind colleagues elsewhere.

“We are light years behind in terms of patient services and the fact that the community pharmacy network in Northern Ireland has been plunged into financial uncertainty since 2011/2012 has had a detrimental impact for everyone. The £20million per annum funding gap and the Department of Health’s reticence to deal with it means that we are regressing.”

The meeting in Westminster comes just days after a range of patient groups here demanded answers from the Department of Health as to why the shortfall is not being met and have serious concerns that it is impacting negatively on patients who are having to wait longer on the medicines they need. 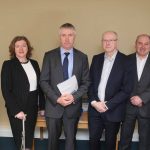 Patient groups such as the MS Society are hugely concerned as it has been suggested that people living with long term conditions such as MS will suffer if there is a shortage of medicines or pharmacies cannot provide the drugs they need daily.

“Patients rely on pharmacists to not only dispense drugs but also to advise them on how to take medicine appropriately and answer any questions they have around managing their medication. We urgently need the Department to recognise that the growing pressures on community pharmacy pose a significant risk to patient safety.”