Every year, 39 million prescription items are issued in Northern Ireland. About 72 tonnes of these medicines, with an estimated value of £6.46m, are returned to community pharmacies as waste. These medicines then cost the Health Service a further £400,000 to dispose of.

At the launch of a campaign to reduce medicine waste, Chairman of the Health and Social Care Board (HSCB), Dr Ian Clements said, “Over-ordering and over-prescribing of medicines leads to an estimated £18m* of wasted medicines each year. If we – patients, members of the public and professionals, all worked together and tried to reduce the amount of wasted medicines, the money saved could be used to fund other vital health services such as more doctors and nurses, or new treatments.”

The campaign will encourage people to only order medicines which they need, review their existing prescriptions with their doctors or pharmacists and not to stockpile medication. 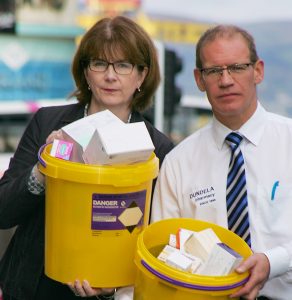 David McCrea, Pharmacist, Dundela Pharmacy, Belfast said, “For patient safety reasons, unused medicines which are returned to pharmacies have to be destroyed and cannot be reused. Community pharmacists can help breakdown any barriers which might prevent a patient from taking their medicines and aid their compliance. We can help patients improve their understanding of their medicines, explain how they work and discuss any concerns they may have such as side-effects.”

In the last year, over 27,000 patients in Northern Ireland had their medication reviewed in community pharmacies and received advice on how to use their medicine more effectively and reduce waste. Medication-related issues were identified in 60% of these reviews and 11% of these patients were referred to their GP or other healthcare professional as a result.

There is also a social cost to unnecessary medicines being prescribed. Media reports have documented the rise in the number of drugs such as diazepam being sold on the streets of Northern Ireland. Some of these drugs have been legitimately prescribed for patients, and are then misused and abused.

Brenda Bradley, Pharmacy Lead, Medicines Governance and Public Health, HSCB said, “We have evidence that some of the drugs found on the streets are unused prescriptions which have been sold or shared with others. This is not only illegal, it is exceptionally dangerous. Taking prescription drugs without proper advice from a health professional can lead to dangerous side effects and fatal consequences.”

The Health and Social Care Board has been working with GPs and community pharmacists to tackle this issue. A long-term project in Belfast has helped to reduce the number of benzodiazepines (tranquilisers) prescribed by over 40% in a ten year period.